Effective vs Marginal Tax Rate: How to Estimate Your Tax Bill 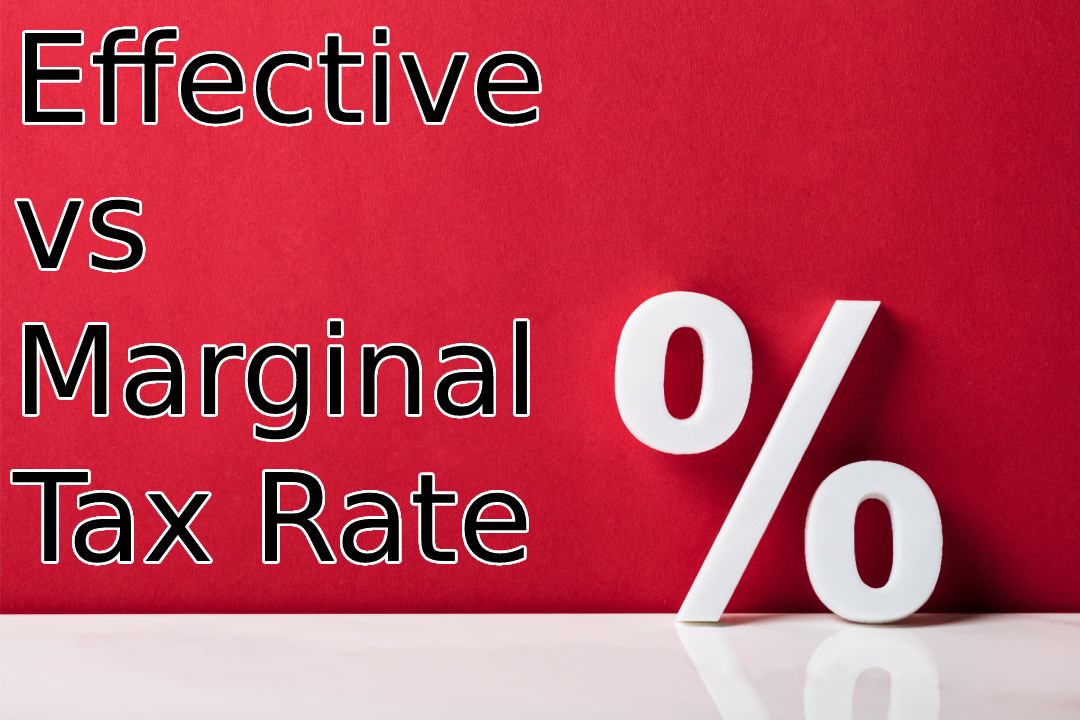 In this article we explain the difference between marginal tax rate and effective tax rate. Learn what each is used for and gain a clear understanding about how much of your income is truly expected to be paid by the IRS.

In this article we explain the difference between marginal tax rate and effective tax rate. Learn what each is used for and gain a clear understanding about how much of your income is truly expected to be paid by the IRS.

What is the Effective Tax Rate?

Calculated by dividing your total tax liability by your taxable income, the ETR is the real-world answer that you ultimately need to know. Your ETR is the actual percentage of tax that you paid for the year. ETRs vary from one taxpayer to the next and yours may very well change from one year to the next as well. If the United States ever institutes a flat income tax rate, the ETR and MTRs would be the same.

What is the Marginal Tax Rate?

The MTR is the tax rate you pay on your last dollar of income. In order to understand the MTR, you need to understand the United States’ progressive tax system. You’re probably much more familiar with the progressive tax system than you think, as we usually refer to the MTR as a tax bracket. As you’re likely aware, the IRS uses a bracketing system to charge taxpayers different tax rates. The lower your income, the lower your tax rate. For a single person in 2020, the IRS tax chart looked like this:

So how does this all relate to the MTR? Remember that your MTR is the tax rate charged on your last dollar of income. As such, the MTR corresponds to this bracketing chart and is determined by your income level. Again, an example will help.

Let’s give our friend Bob an upgrade. He now works as a doctor and his income for the year was $215,000. Based on the chart above, this places Bob in the 35 percent tax bracket and makes his MTR 35 percent.

Now for some good news, Bob. Bob’s MTR is 35 percent, but he’s not actually going to pay that. This is where effective tax rate vs marginal tax rate becomes an important distinction. If Bob paid the MTR, he would simply multiply his earnings by 35 percent and write the IRS a check. Fortunately, Bob hired a good CPA who won’t let him make that mistake.

Her first liability-reducing strategy was encouraging Bob to invest. The money earned by Bob’s investments falls under capital gains and is therefore taxed at a more favorable rate than wages. Bob’s accountant is also making use of the numerous tax deductions to which Bob is entitled. These deductions reduce the amount of federal income tax that Bob must pay by reducing his taxable income. Thanks to a bit of planning and strategizing, Bob’s ETR — the rate he will actually pay — is much smaller than his 35 percent MTR.

Because of capital gains tax and possible tax deductions, two taxpayers with the same amount of income may share an MTR but not an ETR. This may sound odd, but it happens all the time in the tax world. Let’s pretend Bob and Jane are both doctors and both had exactly $200,000 of income in 2020. If so, both will find themselves in the 32 percent bracket. As such, both will have an MTR of 32 percent.

Jane is young, however, and spends all her earnings on avocado toast and fancy coffee. She didn’t buy any investments and she’s not eligible for any tax deductions. She can take the standard deduction of $12,400 but that’s it. Unfortunately, Jane is still in the 32 percent tax bracket after taking this deduction. As such, Jane will pay tax on $187,600 worth of income and do so at the 32 percent rate. Jane’s MTR and ETF are both 32 percent.

Older and (theoretically) wiser, Bob avoids avocados and drinks his coffee black. He was able to take quite a few days off work during the year thanks to some lucrative investments he made previously. He earned the same amount of money as Jane, but some of his earnings are favorably taxed capital gains rather than earned income. He’s also eligible for several tax deductions. This allowed Bob to pay much less income tax even though he made the same amount as Jane. Bob shares Jane’s 32 percent MTR, but his ETR was less than half of Jane’s at 15 percent.

As this example clearly shows, understanding the difference between your MTR and ETR can be quite important, as can planning ahead. A solid understanding of these two concepts can help you devise a sound investment and tax strategy that can ultimately save you a lot of money.

It can also save you some heart palpitations. An independent contractor, for example, may want to try and estimate the amount of tax they’ll owe at the end of the year. If they do so using the MTR, as people often do, they’re likely to get quite a scare when they see the number. In order to plan well, you need to calculate based on your likely ETR, not the much scarier MTR.

Professional Help From A CPA

The professionals at Picnic Tax can help you understand the difference between MTR and ETR. Perhaps more importantly, they can help you devise a plan for lowering your ETR as much as possible. Reach out to us today and we’ll put you on a path to lower taxes as fast as we can. When it comes to lowering your tax bill, there’s no time like the present.